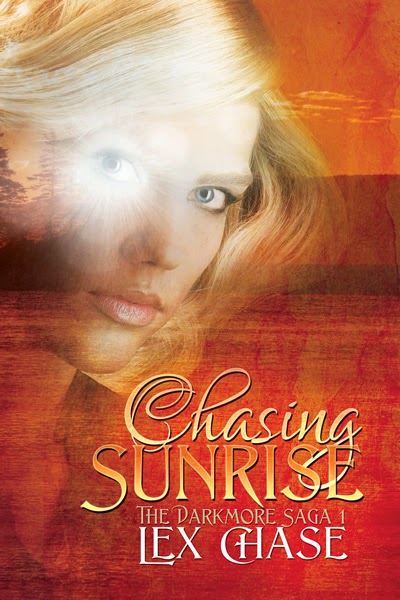 Chasing Sunrise
(The Darkmore Saga, Bk 1)
by Lex Chase
Blurb:
On the Coastal Bend of Texas, a hidden kingdom called Darkmore lies in ruins, and King Sevon Maraté is trapped. Using Sevon as a mouthpiece and a scapegoat, Lord Dominic rules from the shadows. Sevon copes with the unrelenting abuse by dressing in women’s finery and casting an image of graceful nobility. Born of royal verkolai blood and as beautiful as he is lethal, he possesses the ability to part the Veil separating his world from hundreds of others. His gift is his chance to escape, but Dominic refuses to relinquish his tool for power. Dominic forges an ambitious plan to invade the prosperous land of Priagust. Only a select few know the mythic kingdom of shifters exists. Sevon is out of options for his people’s survival, and cooperating with Dominic is his only chance.

On their foray into Priagust, Dominic’s men kidnap and interrogate a shifter named Jack. Even under torture, Jack’s loyalty to his kind never wavers. But as Jack’s knowledge about Darkmore’s king and its history unsettles Sevon, a curious bond begins to form. Despite Sevon’s mistrust, Jack is determined to tame Sevon’s wild heart and perhaps earn his freedom. As invasion looms, Sevon wonders if trusting Jack will lead him into another trap or if he should forget about chasing the sunrise and remain Dominic’s compliant prisoner.

Available for purchase at

Lex Chase once heard Stephen King say in a commercial, “We’re all going to die, I’m just trying to make it a little more interesting.” She knew then she wanted to make the world a little more interesting too.
Weaving tales of cinematic, sweeping adventure and epic love—and depending on how she feels that day—Lex sprinkles in high-speed chases, shower scenes, and more explosions than a Hollywood blockbuster. She loves tales of men who kiss as much as they kick ass. She believes if you’re going to going to march into the depths of hell, it better be beside the one you love.

Lex is a pop culture diva and her DVR is constantly backlogged. She wouldn’t last five minutes without technology in the event of the apocalypse and has nightmares about refusing to leave her cats behind. She is incredibly sentimental, to the point that she gets choked up at holiday commercials. But like the lovers driven to extreme measures to get home for the holidays, Lex believes everyone deserves a happy ending.
Lex also has a knack for sarcasm, never takes herself seriously, and has been nicknamed “The Next Alan Moore” by her friends for all the pain and suffering she inflicts on her characters. She is a Damned Yankee hailing from the frozen backwoods of Maine now residing in the burbs of Northwest Florida, where it could be 80F and she’d still be a popsicle.

She is grateful for and humbled by all the readers. She knows very well she wouldn’t be here if it wasn’t for them and welcomes feedback.
You can find Lex at

a Rafflecopter giveaway
Presented By